There are seven Indian reservation casinos in Florida, and six of these – owned and operated by the Seminole – are Class III tribal operations. That means you’ll get access to just about every type of gambling you’d find in a big Las Vegas casino resort without having to travel across the country to play your favorite slots and table games.

While there are other physical gambling venues throughout FL, for legitimate casino gaming, these seven facilities are your only options in the Sunshine State for brick-and-mortar real money action.

Unfortunately, the Seminole and Miccosukee casinos in Florida aren’t allowed to offer online gambling, so for convenient mobile play, you will have to use a legal offshore gambling site. Still, nothing beats the social atmosphere that a real, physical venue provides for its customers, and we’ve got the full list right here! 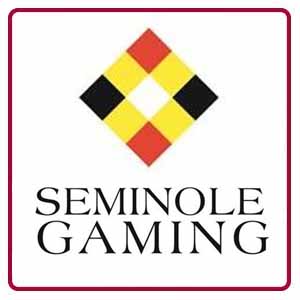 Is It Legal To Gamble At Indian Casinos In Florida?

Yes! In fact, tribal casinos in FL are the only places where you can legally play real slots, table games, and participate in cash poker tables and house-banked poker tournaments.

Florida tribal gambling is regulated by the federal Indian Gaming Regulatory Act (IGRA, 1988) and the state’s Seminole Compact. Because the Miccosukee operate a Class II facility, they do not require an independent FL compact, but they can’t offer the same slate of games that the Seminole casinos can.

To gamble legally at the six Seminole Class III tribal casinos in FL, you must be at least 21 years old. However, since the Miccosukee Resort & Gaming Center is a Class II operation, you only have to be 18 and up to enjoy their offerings.

For those looking to play a full menu of real money online casino games under the age of 21, the only option currently available is to sign up at one of the Florida online casino sites listed in the table above. Each of these offshore casinos accepts FL residents at just 18 years old, which gives you a full three-year head start on your gambling career.

The two FL tribes that operate Indian casinos in Florida are:

For true casino gambling, only the Seminole Florida casinos are able to offer the familiar gamut of games you’re used to. The Miccosukee, on the other hand, are limited to hosting Class II games (Video Lottery Terminals/VLTs, bingo) and poker, which is something most other Class II casinos in the US can’t offer.

At every Seminole Casino, Florida governs their interactions with the venues per the 2010 Gaming Compact (full text here). While this agreement has sufficed for many years, controversy has recently arisen, and US District Judge Robert Hinkle ruled in a 2014 federal court case that the state of FL is in violation of the tribal agreement.

This case came about because various “racinos” in the state (largely at soon-to-be-defunct greyhound tracks) began offering poker and other card games in direct violation of the Seminole’s exclusive rights to host such games.

In 2019, the Seminole began withholding $400 million in annual revenue shares from the state, which were part of the now-violated compact’s earlier terms, and a reworked compact is – according to most analysts – a long way off. Much of the debate currently revolves around the potential legalization of sports betting in FL, and there is no clear path forward at the moment.

Where Are The Florida Indian Casinos?

All Florida Indian casino locations are concentrated in the central and southern parts of the state, as you can see in the list below:

For those gamblers living in North Florida, there are no genuine casinos within reasonable driving distance, which is why the Seminole Hard Rock Tampa location is such a massive casino resort destination and the fourth-largest casino in the United States. It’s worth the trip!

If you have a weekend to spare, the Tampa Hard Rock is the perfect destination for North Florida gamblers. Otherwise, offshore casinos are your best bet, as they’re far more accessible to the majority of FL residents than any brick-and-mortar facility.

South FL is home to the state’s smallest hotel casino, as the Seminole Casino in Immokalee has just 100 rooms on the premises. The 75,000-square-foot gaming floor has over 1300 slot machines and nearly 40 live table games, including blackjack, mini-baccarat, three-card poker, and more. The venue also has four restaurants and eateries, as well as a live concert room for weekly shows.

Located in Coconut Creek in South Florida, this casino is strictly a gambling venue with no attached hotel accommodations. However, the site boasts 100,000 square feet of gaming space with over 2000 slots and 70 live table games (blackjack, baccarat, poker, etc.). The venue also features eight restaurants, three lounges, and The Pavilion, which hosts live nightly entertainment.

The Seminole Hard Rock Hollywood is the largest casino resort in the state, with two hotel towers – including the famed Guitar Hotel building – and a 140,000-square-foot gaming floor located on 100 acres of tribal land. The casino features 15 restaurants and lounges and 1271 rooms and suites. Spas, pools, cabanas, and nightly entertainment venues are also on-site.

Located in Tampa on the west coast of the Central FL peninsula, the Hard Rock Tampa is the flagship Seminole casino. With a massive 245,000-square-foot gaming floor, it’s the fourth-largest casino in the US and sixth largest in the world. The venue features 800+ hotel rooms, over 5000 slots, 170 table games, and a live poker room with 46 poker tables. Spas, pools, and entertainment venues abound on the property, and 13 restaurants are available for gastronomes of all flavors.

The Seminole Classic Casino – one of the first Indian casinos to open in America – is located in Hollywood, FL. While it does not offer lodgings, this South Florida casino has a 73,500-square-foot gaming floor that is home to over 1000 slots and a host of table games including blackjack, Spanish 21, three-card poker, mini-bac, and more. The Classic Casino also has four restaurants, three lounges, and a live entertainment venue.

As the state’s sole Class II casino, Miccosukee Resort & Gaming is located in the heart of the Everglades, nested deep in the Miccosukee Reservation and heralded as “one of the most unusual resort destinations in Florida.” The venue has 312 hotel rooms and suites, a spa and salon, a pool, and other amenities (including a teen arcade for underage guests). The casino games available on its intimate gaming floor include slot-like VLTs, bingo, and a poker room.

When it comes to determining the biggest FL casino, there are two ways to look at the question. In terms of gaming space, the Seminole Hard Rock in Tampa, Florida, is the largest, with 245,000 square feet of gaming space and 800+ hotel rooms.

However, in terms of the property itself – when factoring in all the resort amenities, the number of rooms, and so on – the recently-renovated Hard Rock Hollywood is the largest FL casino by far, as it boasts nearly 1300 rooms and suites. Dubbed the Guitar Casino, Florida residents have named it this due to its brand-new guitar-shaped luxury hotel tower. 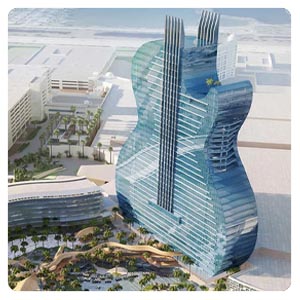 Where is the Seminole Hard Rock Casino? Expand

There are actually two Seminole Hard Rock casinos in the state of Florida. These are both considered to be the tribe’s flagships, though they each bring something unique to the table.

Both casinos were established in 2004, with the Tampa venue having the sixth largest gaming floor in the world and the Hollywood venue having more recreational and “tourist” amusements, including the famous Hard Rock casino guitar hotel tower.

Unlike many Vegas casinos, the Hard Rock casinos in FL do not have free alcoholic beverages – or “comped drinks” – available to players. However, soft drinks are free when playing on the gambling floor, which is probably better, anyway.

After all, when you’re gambling in the Sunshine State, you’ll want to keep your wits – and your sunny disposition – about you.

There are no roulette tables at casinos in Florida, but the game is now included in the new 2021 tribal compact that governs the Seminole’s Class III venues. It is unclear when these games will hit the floors, however.

In the meantime, you can play video roulette at gambling terminals on the gaming floors at both Hard Rock locations.

Video roulette uses reliable, trustworthy random number generation (RNG) technology to provide accurate results. This is the same technology used by reputable overseas betting sites that operate outside of FL and US jurisdiction.

Does Seminole Casino have craps? Expand

Once again, not yet.

Craps, along with roulette, was the other form of traditional casino gaming that was not allowed for by the state’s previous gaming compact with the Seminole Tribe of Florida. The new 2021 compact has allowances for live craps table games, however.

Currently, patrons at Seminole casinos can play electronic craps, which is powered by RNG technology to ensure a fair “shake” of the dice.

Still, because traditional craps uses dice thrown by actual players, the betting experience mimics wagering on the shooter, but not being the shooter yourself.

Hopefully, both craps and roulette will be launched in Florida soon.

Can you smoke in the Seminole Hard Rock Casino? Expand

Yes, in designated areas limited to the gaming floor.

The Florida Clean Indoor Act requires indoor casinos, jai alai frontons, bingo halls, dog tracks, and all other such locations to be non-smoking.

However, because the Seminole casinos are on sovereign tribal land, they are exempt from the mandate and allow their patrons to smoke.

What federal laws do tribal casinos have to follow? Expand

Tribal casinos in Florida – and the rest of the united states – are governed by the Indian Gaming Regulatory Act of 1988, or IGRA.

The IGRA laid the groundwork for the legalization of tribal casinos for those tribes that qualify, and it defines all tribal gaming as one of three categories: Class I, Class II, and Class III.

In Florida, the six Seminole casinos are Class III venues, operating under the IGRA and a state compact.

The sole Class II casino in the state, Miccosukee Resort & Gaming, operates under the federal IGRA entirely and does not need a state compact due to the limited game selection offered.

Tribal casinos in the US do not pay federal income taxes on their operations’ revenues, which are estimated at north of $27 billion nationwide.

In FL, there is no state income tax, so the Seminole and Miccosukee do not have to pay those, either.

However, until recently, the Seminole had an agreement with the FL government to pay the state a portion of its slot revenue (this sort of revenue sharing is common among tribal casinos throughout the US), which amounted to some $350-400 million per year.

Unfortunately, the state was judged to have violated the tribal compact, and the Seminole have withheld these payments since 2018.

Update: In 2021, the Seminole Tribe of Florida and the state of Florida signed a new updated compact that restores the above slot shares, which are estimated to generate $500 million annually for FL.

Mostly, this money goes to the tribe’s coffers and supports the governance of the tribe’s people on its reservation(s). Many tribes also give their citizens a stipend out of this revenue.

In the cases where tribes share their profits with the state, the state typically earmarks such proceeds for educational initiatives.

Why are casinos built on Indian reservations? Expand

Casinos are built on Indian reservations thanks to the IGRA (1988), which was a federal law that determined such operations to be lawful due to the sovereign status of tribal nations.

The IGRA was born of two court cases. Byran v. Itasca County was a 1970s case that determined states could not levy property taxes on tribal land.

Another case, from the mid-1980s, was California v. Cabazon Band of Mission Indians, which held that the operation of the tribe’s bingo hall on sovereign land could not be prohibited by state law.

These two cases led to the IGRA, giving recognized tribes the authority to host Class I and II gaming without any state permission, as well as Class III gaming as agreed to via state compacts.